Moving Forward with the House

It has been a long time since my last post about our house. There is a good reason for that. I was waiting to make sure that we were truly moving forward before I did another post.

In the first post I described the process of picking the lot and the design. The actual design and layout of the house are still very close to that last post. In fact, the layout of the house hasn’t changed, the only things that have changed are just some interior details like door widths, kitchen layout, etc. If you are interested in seeing the very final floor plans let me know and I will post updated pictures. However, despite the fact that the design is still mostly the same, a lot has happened since the last post. I want to describe some of the major things that have occurred.

Choosing a Builder
One of the biggest decisions we had to make was who was going to build our home. We talked with lots of different builders and this was a harder decision than I thought it was going to be. In College Station, most new homes are built with builders that are really only doing a semi-custom design. What this means is that the builder has a set of home plans that they use regularly and then you pick the interior finishes from a set that they use. This process is great for a lot of people because it results generally in slightly lower costs because the builders already know what it takes to build those plans, and because they know the costs of the materials.

However, we were doing a fully custom design. Once you have made this choice then you need to find a builder that is fully comfortable working with architectural plans and drawings that they did not prepare and your set of options expands dramatically. College Station has a very robust custom home building scene and so there were still a number of high-quality builders to choose from. We got recommendations from our realtor, from friends at work and from friends at church. We initially contacted 7 or 8 builders and we had face to face meetings with 5 or 6.

One of the things we learned was that the builders in the area tended to operate under one of two models. The first model is one where you give the builder (or builders) a set of rough plans and they prepare a bid for your job. The bids are filled with estimates for what they think it will cost to build your house. As part of the bid they include “allowances” for the homeowner as to how much you can spend on appliances, fixtures, flooring, tile, etc. You pick a builder based on these bids and then you sign a contract to begin building. Generally the construct is structured as “cost-plus”. You pay the actual costs of construction plus a percentage fee to the builder for their services. The advantage to this method is that you get multiple bids from different contractors and you are generally able to start construction quickly. The disadvantage is that everything up to this point is truly an estimate and usually the final cost of construction is higher because the allowances are not enough for people to pick what they truly want (because they haven’t gone shopping yet, so they don’t know what they want).

The other model is to work with one specific builder to generate a fixed price contract. In this model you pick your builder in advance and you don’t get multiple bids. Instead you work with that builder to go through your plans and to make all of your choices in advance. So you select your appliances, fixtures, flooring, tile and everything else to know exactly how much you will spend. The builder also goes to their subcontractors and gets hard prices on what it will cost them to do the various jobs such as framing, concrete, plumbing, HVAC, etc. The advantage to this method is that at the end of the process you have a hard number for what the house will cost you. The disadvantage is that it takes a long time and generally you are locked into that price because the builder is taking some risk to guarantee a maximum price, they build that risk into their prices and it will not go down.
We were really uncomfortable with the risk of a true cost plus contract. So we talked with the builder that we felt most comfortable with and asked if they would be willing to do a fixed price contract and they were. So we chose CGM as our builder and started moving forward. In order for them to generate the price to build our home they needed full construction drawings from our architect and we had to go pick out all of the items in the home.

Picking Everything
So mostly what Stephanie and I have been doing since the last post is picking out everything that will go into our house. Here is an abbreviated list of the things we had to pick. Exterior stone, exterior siding, roof material and color, flooring, bathroom tile, kitchen appliances, faucets, sinks, lighting, ceiling fans, garage doors, windows, doors, door hardware, built-in cabinetry, and more.

It was exhilarating and exhausting. Luckily Stephanie and I had done a renovation project before and we watch a lot of home shows. This really helped us because we already had a very good sense of what kinds of things we liked. Most of the time we were able to easily see the style of things we like and eliminate things that we did not like. It also helped that we have very similar taste. It is not identical, but we like mostly the same things. My parents also did a great job of being decisive here.

The way the process worked is that our builder worked up an initial estimate to help guide us when we were making choices. So we had told him approximately what we hoped the house would cost to build, and then using that number he had worked backwards to generate numbers to guide us as to what we should spend on the various categories. This was very helpful and we tried hard to stick within these guidelines.

However, what I was constantly amazed and frustrated by was how difficult it was to get the pricing of various things when we were trying to make choices. When you are building a custom home, you generally do not just go to Home Depot or Lowes and pick everything off the shelf where the price is neatly displayed. You are generally working with wholesale firms who can get better prices for your builder. However the prices are never on display and are often difficult to see until after selections have been made. So mostly we would go to a distributor and have to make our choices without really knowing what they would cost. Then a few days (or a week) later, they would generate a price which we would then have to try and reduce. There were so many times I wished we could have gone in and told the person that we wanted to spend a certain amount, and then they would show us what is available in that price range. But that is not the way that things work. What I tried to do as much as possible was do lots or prep work online before we would go to a meeting to try and reduce our options, and also to try and do some figuring out of prices. Overall it worked out, despite being frustrating at times.

Working on the Budget
After making all of our selections we also had to have our builder meet with subcontractors to get estimates and bids on the various aspects of the job. This was at times, nerve-wracking because we had a number of instances where the bid was much higher than our builder’s initial estimate and so we were worried about whether the entire budget would work out. However, John at CGM has been very great throughout the process of advocating for us and trying to make sure everything works out. At the end of this long process we decided to slightly modify the type of contract we went with. We ended up signing a contract that is a cost-plus not to exceed contract. CGM was willing to do this kind of contract because we had gone through the long process of making all of our selections in advance. The advantage of this type of contract is that we know the final amount will not exceed the top number, but if we have cost savings along the way, we can capture some of those back and either spend less or use that money to upgrade some things. It is kind of the best of both worlds for us.

Moving Forward
Today we had a meeting and we officially signed the construction contract on the house. Afterwards I dropped off the plans and contracts with the bank. I have already worked out financing with the bank, but the bank needs to take our plans and specifications and appraise them to make sure that the house we will build will be worth the money they are lending us. It was very exciting to be moving forward. It looks like we should break ground sometime in December.
Posted by Steve at 3:04 PM 3 comments:

Seth has lost his 4 bottom teeth and the 2 on the top were starting to get wiggly. On Wednesday, Seth plays with his friend Henry while Rhianna and Rand have piano lessons from Henry's mom. When I went to pick them up this week, Seth said they had been sword fighting, he got stabbed in the mouth and so he was pretty sure he was going to loose his tooth.

When we got home he was wiggling it and tasting blood. So after dinner he said he wanted an apple to help get the tooth out. He worked at biting it for a while, then he just bashed the apple into his face. I think maybe one more bite and then he pulled his tooth out. He rinsed his mouth and then finished his apple. I hate pulling teeth out so I guess the kids get them out in creative ways! 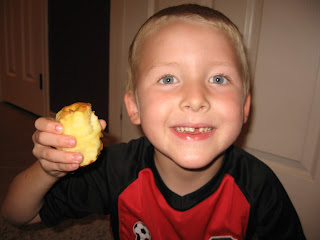 Maren started taking a few steps just before she was 11 months...and that's about where she stayed for a full month. Then all of a sudden these last few weeks she figured out she could walk farther and now she goes faster. I thought I would share a little video of her - She also loves crackers. I think it is that she can say "cra" so we know what she wants and she can hold them and eat them. We go through a ridiculous amount every day in part because she is so stinking cute when she asks me for them.

The kids are quite happy with all their Halloween candy - We had a trunk-or-treat at the church on Wednesday night where they got some candy and played a few games. Then last night we just did a small loop in our neighborhood for more treats. 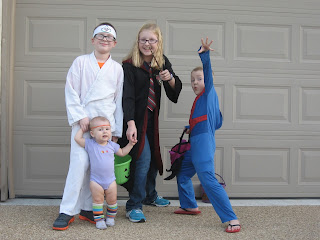 Rhianna (Hermione) Rand (Ninja with his own symbol) Seth (Spiderman) Maren (80's aerobics girl)
*Luckily it is our first year here so no one knows they have used some of these costumes for the past 3-4 years...we promised a bit more planning next year....but they were beautiful nights outside and the kids had fun!
Posted by Stephanie at 10:49 AM No comments: