Astronomy is one of the areas in science that I really like. Rand got excited last week when he learned about the solar eclipse and so it was easy for me to get into it too. The Tucson area actually has several observatories. I went to the U of A Flandrau Planetarium and got eclipse glasses. There is also someone in our ward who studies astronomy. She focuses on galaxies, but it was interesting to talk to her about the eclipse and learn more. 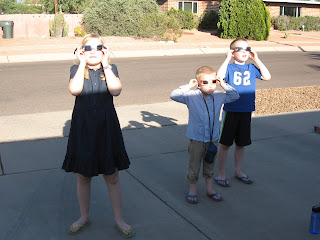 So we were prepared and excited! Some of the areas in northern Arizona (like the Grand Canyon) got to see the full Ring of Fire effect. Since we are farther south, it was a partial eclipse. But it was really fun and cool and interesting for the kids and me. We went outside right at 5:30 and the kids said that maybe it was starting, but second guessed themselves. I looked and said that yes just the tiniest part of the Sun was getting covered. We stayed outside for about 1 1/2 hours, sitting in the shade of our carport since it was super hot, getting up to look every 5-10 minutes. We took an ice cream break, Steve came out to look a few times, Rhianna told jokes, Rand got hot and went inside, Seth shook water from his water bottle all over himself. It was a fun evening and really fascinating. I am glad I got the eclipse glasses and that we could see something so unique. 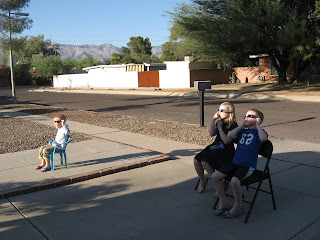 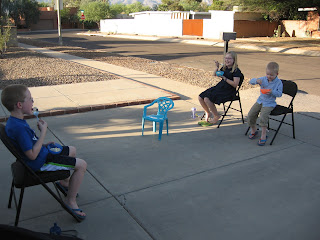 Now we are also looking forward to watching the Transit of Venus using our same glasses on June 5.
Posted by Stephanie at 2:38 PM