We have been in Arizona for 6 years now but never up to northern Arizona to see some of the sites up there. We took a short 4 day trip and saw some amazing things.

Thursday we first went to the Mesa Temple. The kids had fun looking at things in the visitor's center while I went. Then while Steve was inside, I took the kids to the Natural History Museum. There was a dino dig pit and panning for gold to do outside, plus much more than we expected to look at inside. We ate a delicious lunch at Rudy's BBQ and then drove up to Flagstaff. 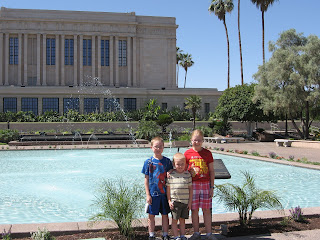 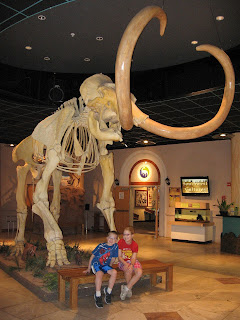 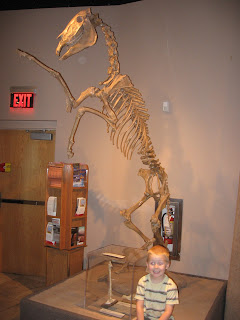 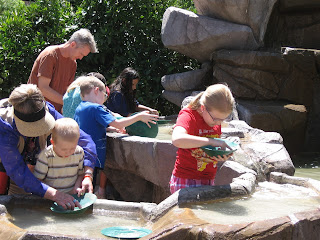 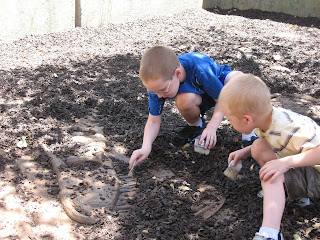 The kids really liked staying in the hotel, watching movies later, eating the free breakfast with made to order omelets, and drinking hot chocolate. Friday morning was kind of funny - we knew it would be cooler than the 100 degree weather in Tucson, but we didn't look at the actual forecast. Arizona had a crazy wind storm come through which cooled things off. Friday was actually good temps just slightly chilly with the wind, so first we went to Target and all got jackets. Then we headed to Sunset Crater. This was a volcano that erupted about 1000 years ago and left a big lava trail. There were a few places to get out and just look and then we went on one mile long hike around the base of the mountain. It was great seeing the lava from big rocks down to tiny black lava sand. 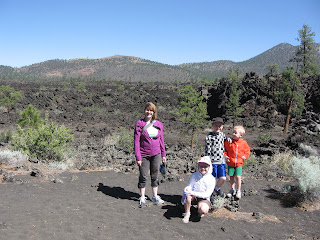 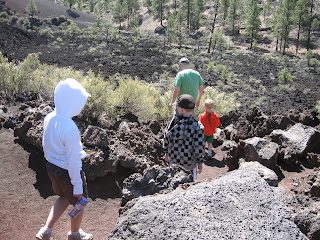 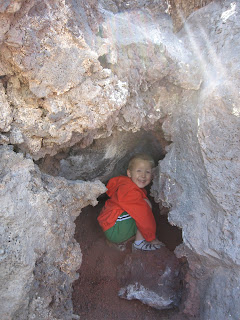 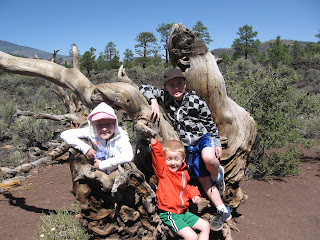 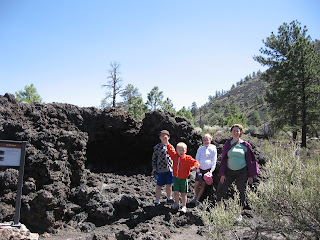 Nearby there is another park called Wupatki that has some Native American ruins. Rand saw his robber fly in the visitor's center. It was interesting for Rhianna I think because she studied Arizona history this past year. Down below the big house was what they called the ball court. We are pretty sure this is where they sent their kids to play and Rand and Seth tested it out. 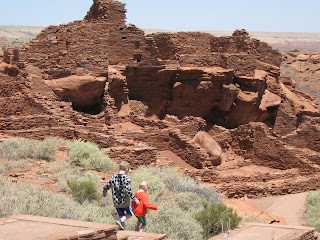 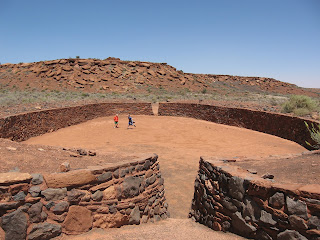 I must mention we also ate well on this trip. Steve had looked up restaurants ahead of time that were either on TV shows like Diners, Drive-ins and Dives or on the Best of Flagstaff list. So most meals were quite good. We also attempted swimming this afternoon, but the wind was just too much.

Saturday was even crazier. We drove out to the Petrified Forest. There were just tons of logs turned to stone all over. There were several places you could get out and do small hikes. We tried a few but it was even hard for me to fight the wind and walk. One time it almost felt like the car door was going to blow off. Besides the petrified wood, there were other cool rock formations and some petroglyphs. 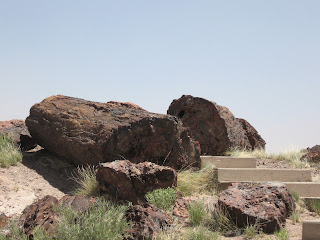 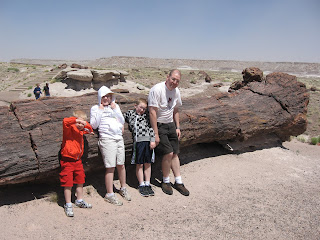 Back in Flagstaff we stopped at the visitor's center for a few souvenirs and to buy our pass into the Grand Canyon. It is right next to the train tracks and the kids liked standing a few feet away. Rand counted 94 cars on the train that passed. 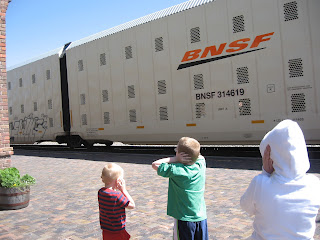 Sunday we went to sacrament meeting and then headed to the Grand Canyon. Part of the drive was hilarious because Steve started telling the kids how much he would pay them for spotting different animals first...$5 for a deer, $100 for a bear, $1000 for a jackalope...and Seth was hooked. Then Seth began asking how much he would get for finding a jackalope eating a bear that was eating a moose. It kept him busy for a long time looking for a "bunny with deer ears" and all kinds of creatures. The only things we did see were cows and elk and squirrels. 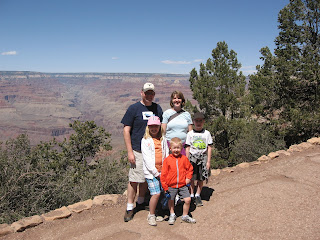 The park was super busy with Memorial Day weekend. The pass got us in faster and it just took a little while to park and wait for a few buses. I didn't really realize there would be so many places to see the canyon. There are shuttle buses that bring you to different spots. We first went to the main trail head. We also didn't realize the trail just starts right there. It is a big hike all the way to the bottom and we thought it would be more heavy duty but anyone can just head down. I think you really need to be prepared if you are to do the full hike and they suggest taking 2 days to go down and back up. The path is a fairly good one, but with no rails and the huge canyon it made Rhianna especially nervous. She and I stayed at the top and Steve took Rand and Seth down a little ways to the hole in the rock you can see. We could look way down below and see people hiking farther or riding donkeys...it is a long ways down. 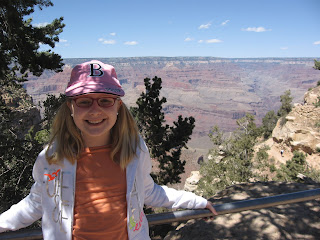 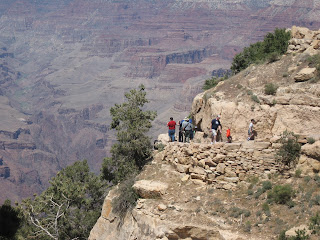 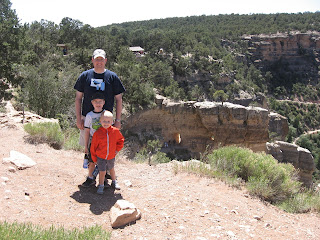 Some of the other viewpoints we stopped at had rails, some did not. Our kids did good at being cautious but still enjoying all we could see. We did one small trail on the rim between 2 viewpoints. It really is amazing how wide and deep and long the canyon is. I liked seeing the different colors of rock layers. There are only a few spots you can see the river far below. We stayed for about 5 hours and then headed all the way back to Tucson. 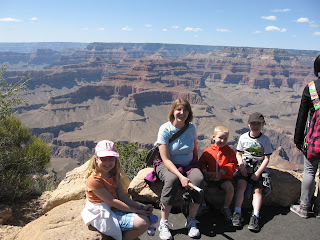 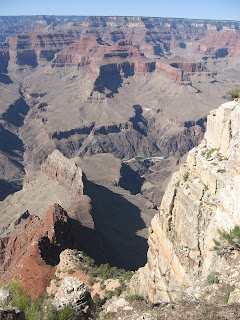 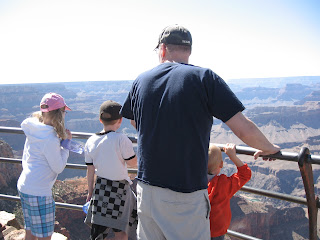 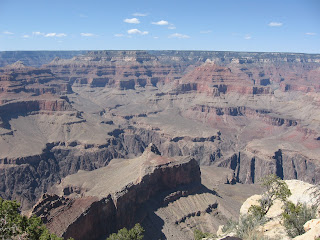 Posted by Stephanie at 8:49 PM

Looks like it was a fun trip. I haven't been to the grand canyon since I was in high school!

I would have been freaking out along those edges. It gives me a heart attack just seeing you sitting there. Amazing views!