Today I received my official notice from the university that my promotion to associate professor with tenure has been approved. I will officially become an associate professor with the start of the new semester in the fall. This is very good news. The process is a long one, especially here at the University of Arizona. I submitted my tenure packet (a set of materials that makes the case why they should promote me) in August of last year. 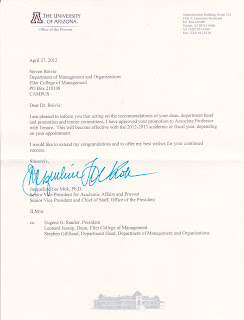 This is the official letter from the university. It is not that exciting to read, but it is nice to have. For those of you who are not fully steeped in academia, I will explain what getting tenure means. Tenure means a few things. First, it means that a professor has made a meaningful contribution to his/her field of knowledge. For me that is research in the field of management (I do research specifically on boards of directors and top executives). The promotion committees evaluate whether you have made a meaningful contribution by looking at how many academic articles you have published, whether those articles have been published in  rigorous and prestigious journals, and by getting letters from other prominent researchers assessing your research contributions. It is a significant thing to have published enough research that your peers say that you have done something meaningful. (Note: If you want to learn more about what I actually do in terms of research, feel free to go to my academic website: StevenBoivie.com.)

Second, getting tenure means that I am advancing in rank from assistant professor, to that of associate professor. There are only three real ranks an academic can achieve (assistant, associate, and full professor), so moving to the middle rank is significant. This also means that I will be expected to take on a broader role within my department and the academic community in terms of mentoring students, sitting on departmental and university committees, reviewing and editing research articles, and more.

Third, it means that the university is committing to employ me until I retire. Essentially I have a job here as long as I want one. This kind of job security is unparallelled outside of an academic setting. The principle behind lifetime employment is that it gives academics freedom to do research and publish on unpopular topics without fear of reprisal from university officials. However, in practice it seems to exist mostly because of competitive pressure.

Finally, the promotion is usually accompanied by a raise. Academic salaries do not usually go up much from year to year, so the promotion opportunities that occur with promotion to associate and full professor are usually the most significant raises you will ever see, unless you change jobs. Currently I do not know how much of a raise I will get, but any raise will obviously be nice.

So, this is a big day for me and for my family. I feel very appreciate for all of the blessings that I have received. I have worked hard to get this promotion, but I am also very aware that most of my success comes because I have been blessed by the Lord.
Posted by Steve at 9:19 PM 8 comments:

We wanted to let you all know I am pregnant with baby #4. This has been fun news to share with many people over the last few weeks. All of our children have slightly different stories. With this baby we felt spiritually guided to have another. For me that has been a great blessing so far. We started trying last summer and having had those spiritual experiences instead of feeling sad as the months passed, I always felt more hopeful that the baby would come sometime. And honestly in the past I haven't loved being pregnant...often I feel more stressed and worried about myself and the baby. But again I have felt more calm and peace.

We told our kids in March before I went on a skiing trip where I wasn't going to ski. It was really fun hearing and seeing their reactions as we told them there was actually a baby in me right then. They have all been good about praying for me and the baby and understanding that I need more rest and food and water. Seth is excited to now be a big brother too - and the baby will come close to his birthday - due on October 24. We did tell the kids then that it was still early and this was an exciting special family secret to keep until the baby was a little bigger.

I had another appointment on April 2. Everything still looked good, so they got the go ahead to tell all their friends and teachers. We know great people and it has been so nice to get many happy wishes from family and friends at work, school, and church. 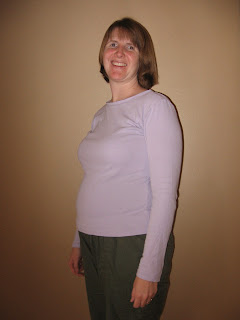 PS - This time around I have felt more generally nauseous. Combine that with already taking HUGE prenatal vitamins for 9 months and I couldn't take it any more. I was gagging them down every morning. Then I said, "I wish they made gummy prenatal vitamins like they make gummy ones for kids" and soon Steve had found that Walgreens and others do sell them. They don't taste great, but are an okay fruity flavor - and I don't have to swallow the huge things any more!
Posted by Stephanie at 9:36 PM 5 comments:

When Rhianna started Kindergarten it was quickly clear we could potentially have lots more papers and projects we could keep. While I do keep a few papers in a totally unorganized file, many things we just take pictures of to help us keep the memories. The kids have done several projects over the last few months I have been meaning to post so others who are family or friends can see them. 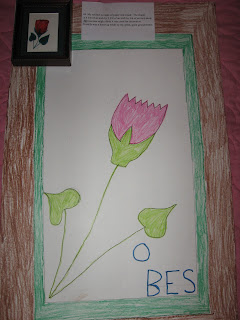 This was when Rhianna's class talked about artifacts and they had to bring something from their family. They drew copies of the artifact and presented their posters to the whole school. This is Rhianna's copy of a drawing my great-grandma (Omama) did. 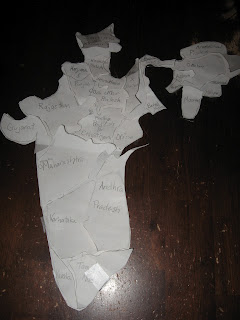 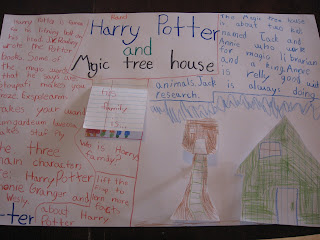 These were projects the kids did in GATE back in December. Rhianna made this map of India showing all the states. The states open up and show the pathway we took on our trip. Rand did a poster about 2 magical books he likes and made a flap to open and the house and treehouse pop out. 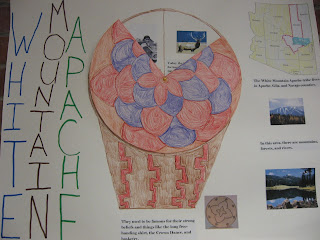 This is Rhianna's Native American Tribe project (they learn about Arizona history in 4th grade). The White Mountain Apache are known for their baskets and so she made the basket in the center and you can turn the wheel to see more facts and pictures. 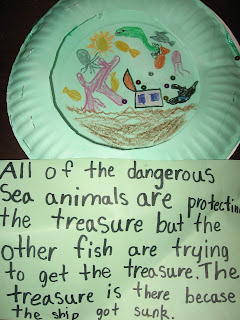 Rand's class did a unit on fish (which is how we came to have a pet goldfish). This is a cool aquarium they made. The 2 paper plates are stapled together with colored plastic wrap going over the plate/whole in the front. The kids could create their own picture and story for the underwater picture. 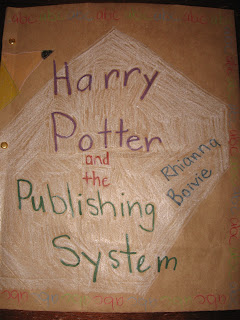 For this GATE project Rhianna had to choose a system...which she combined with her love of Harry Potter. She made this book cover and researched and wrote a paper about publishing. 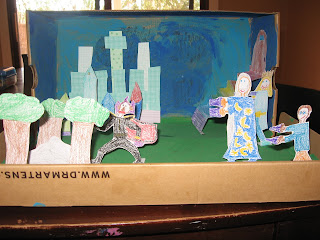 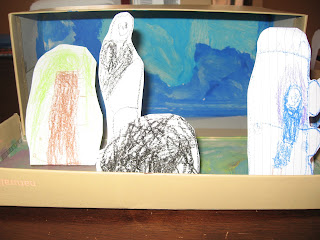 Rand did his GATE project about the Secrets of Droon books. He has read the whole series. He wrote a paper and made this diorama. You can see the magic shooting from the good characters at Lord Sparr. And Seth didn't want to be left out. So he made a diorama too. 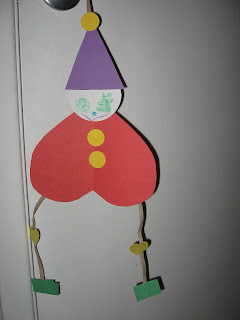 This was a craft Seth did at library story time. It was close to Valentine's and they talked about shapes and made this clown with a heart and other shapes. 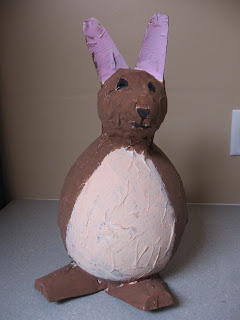 This was for Rhianna's project about an animal found in Arizona. In class they did research reports. At home they had to make a fact card about the animal and a 3D model. We used our pinata skills and made this paper mache desert cottontail rabbit. We used balloons for the body and head and plastic cups cut in pieces for the feet and ears and taped it all together. Then we got the flour/water goop and covered it all in newspaper. She painted it after it was dry and did a fun presentation to her class.

Posted by Stephanie at 6:52 PM No comments: