Our little trip to Vermont all started last fall. My sister Maria was approaching her 30th birthday and her husband Dave had already talked to my sister Valerie and they were planning on doing a ski trip to surprise her. So Dave emailed the rest of us, more just to let us know and to see if anyone else could make it. Well we each separately figured out that we could come. So this surprise idea of his turned out great. Almost all of our family was there - Mom and Dad are India and Michael on his mission in Brazil so they couldn't come. Since we were flying and have the farthest to come, Steve stayed home with the boys and this was just a trip for Rhianna and me. It was great timing since it was spring break at the U of A - so Steve worked fast to grade midterms and then could stay home with Rand and Seth.

We flew on Wednesday, March 14 from Tucson to Dallas to Boston. This was the worst my ears have ever hurt...I was slightly sick and congested and they just killed me on the descent both times. My ears didn't unplug until sometime that night. Our second flight was interesting and we had a fun conversation with Heidi (Paul Frank's - the one who drew the monkey you see often - sister). We took a bus to the train station and met Dave for the train ride to his house.

On Thursday we headed up to Vermont. Both ways I had a nice time talking with Maria and Rhianna and Emmy got to tell stories. We only almost slightly got lost trying to find a Subway for lunch, but ate at a nice cafe instead. My parents paid for the house we rented and stayed in. It was just the perfect size. We brought most of the food with us, which was a good thing since milk was more than $5 a gallon. Dave had already picked up Calvin and Jane and we were waiting for Valerie and Brian and Becky and their family to come. I made dinner while they got their ski rentals....and the fun started. We ate and played games and continued as everyone arrived. 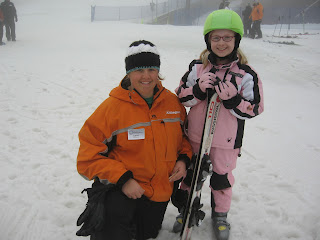 Friday Maria made French toast and we headed out to Killington. It was super foggy in the morning. We got Rhianna's ski rentals and went out for her class. She was signed up for the Learn to Ski class for those never on skis before (and she really hadn't even seen that much snow before). Both days it turned out great since it wasn't super busy and she got a one-on-one lesson. She really liked Katie and was going on the carpet lift and skiing down. Emmy also took a lesson in the morning and everyone else went out skiing while I watched Hannah and Luella in the lodge.

At lunch, Rhianna was still ready to go and so she continued with Valerie and Brian. They were really great and helped her on the chair lift and coming all the way down the big mountain. That was a big deal for her, kind of scary and hard, but she made it with their help. They also played in the snow and built snowmen. Meanwhile, I took Emmy and the 2 little girls back home. Lukas and Logan did lessons and everyone skied the afternoon. The little girls slept and Emmy and I had some fun playing. That night again was the hot tub, Curry Chicken by Becky, and many more games. 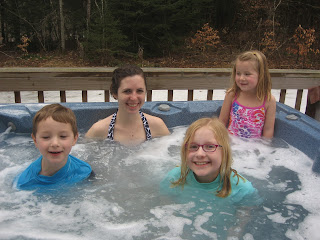 Saturday we awoke to Leprechaun mischief on St Patrick's Day aka Valerie's birthday. Maria made German Pancakes and we headed back to the mountain. Becky stayed home with her kids and Emmy and they played around the house and outside. I watched Hannah in the morning while Rhianna had lessons with Jean and all the rest skied. Rhianna even went over to the other bigger carpet this day and was getting better at turns. I had some good conversations with others in the lodge while I was watching Hannah. After lunch Dave and Andrew just did one last run and then we headed back. Brian, Maria, Valerie, Calvin and Jane all stayed longer, but said with the nice warm weather the snow was melting so fast there was more than a foot of water to ski through at the base to get back on the lifts. That night - hot tub, pizza by Jane, dance party, birthday party, cake, more games until midnight.

Sunday everyone headed out. We really do love being together. It was fun just doing this trip with Rhianna, both seeing her play with her cousins, but also getting to ski and to play games late with the adults. We went back to Maria and Dave's and just relaxed, watched movies, and played games. Our flights home were on Monday afternoon and all the travel went well. We even went through Chicago and only got delayed about 30 minutes. 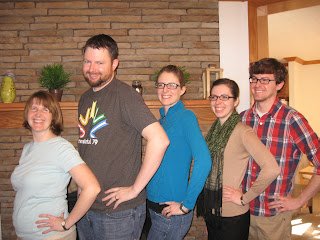 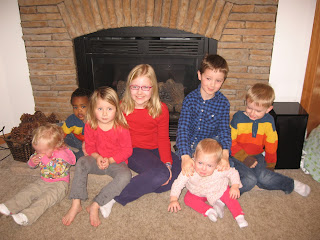