On Saturday we flew up to Delhi. New Delhi is by far the most normal Indian city we visited. Traffic was normal, people stayed in lanes, there was little honking, few people or animals crossing the streets. We were only there for a day, so I am sure there is more variety throughout the city, but the parts we saw seemed very modern and well kept. On Sunday we tried to find the church and we think we were close but after an hour and a half of trying and looking we gave up. Instead we had a short lesson and shared testimonies back in the hotel and that was quite nice as well.

Since it was Sunday we didn't want to do much. In the afternoon we did go out mainly driving to see some of the government buildings of New Delhi and stopped at Qutub Minar. At this site there used to be several Hindu temples. Then when some conquerors from Afghanistan came in the 1100s that were Muslim they knocked down the temples and built this mosque with a huge tower. The tower is impressive and I believe our guide said it was built with no cement or mortar, just by tightly fitting the stones together. The mosque is not used however since they have discovered some of the Hindu images remain. 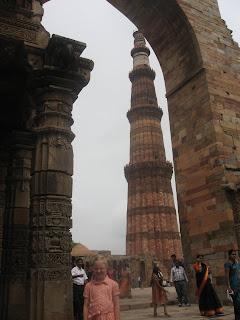 On Monday we left early to drive to Agra. Our hotel packed breakfast for us and we left at 7 am. When our driver stopped at 8:30 we were a little surprised that the toilet break was so early. But when we came back to the car he said he was having hand problems. We checked back with him in 15 minutes and we were very worried for him. We thought he was likely having a stroke. He said he was numb on the entire right side, his speech was more difficult...we called the travel company and they sent new drivers and someone to take him to the hospital. We kept checking on him, but not knowing any more medicine and not knowing the Indian system there wasn't much we could do. It took a few hours but then we were on our way and so was the old driver for help (We did find out later he was doing okay.)

Next lesson learned: As we entered Uttar Pradesh, a new state, the driver had to stop to go pay the taxes. Several men rushed up and put monkeys on the car. If a man puts a monkey on your car, don't take a picture. I did and they then expected me to pay and were quite mad for a while. It was one of the few times I felt nervous. We saw this a few times in India. I sometimes had to intentionally shift my photo or the people might expect payment. 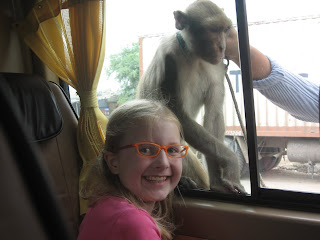 We first stopped just outside of Agra at a tomb of Akbar. I believe he was the grandfather of the man who built the Taj Mahal. Here we began to be introduced to the symmetrical, very exact building that these leaders loved. There are gates around the edges of the gardens and the arches match up perfectly with the arches throughout the tomb. The tomb was of red sandstone and beautiful. There were also several of a special kind of antelope with curved horns there on the grounds. 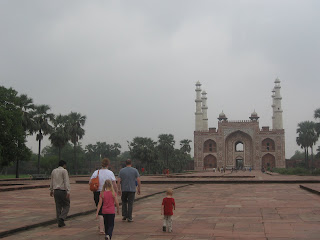 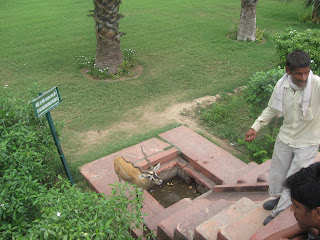 We went into Agra and after lunch at the hotel headed out to the Taj Mahal. Cars are only allowed to a certain point where we bought our tickets (which came with shoe covers and a water bottle) and rode an electric car closer in. Part of what you never see is that around the Taj Mahal again there are several outer buildings, many made of sandstone. There is also a symmetry here with a mosque on one side and a matching building on the other. Again the gates line up perfectly with the arches of the Taj Mahal. 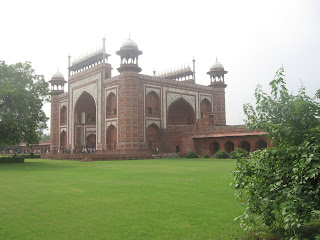 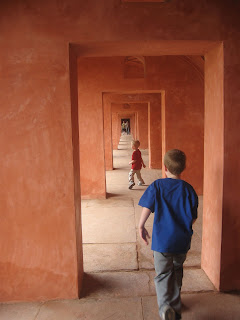 I didn't realize how massive the Taj Mahal is. It is gorgeous white marble. But from the pictures you don't see the detail. Some of it is carved work, carving the marble in floral patterns. Much of it is inlay work, where they have removed a portion of the marble then inlaid semi-precious stones to form the designs. Later we were taught at a store how they do this detailed, intense, time consuming, beautiful work. I loved looking at the variety of design and just how detailed and covered this whole huge building was. Inside the tomb was very dark and hard to see, but the guide did show us a little with a flashlight, especially the firestone which shines in the light. We had great timing and were able to walk the grounds and up and through the Taj before it began raining. 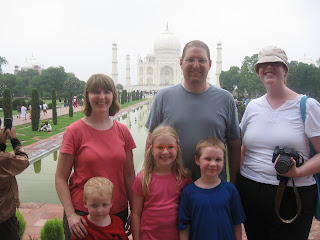 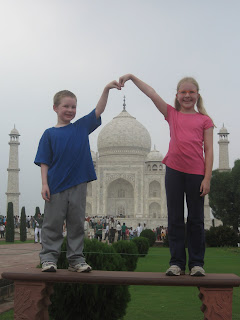 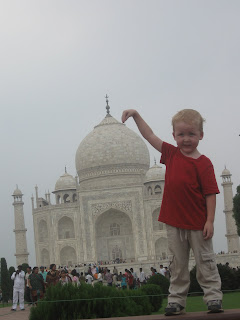 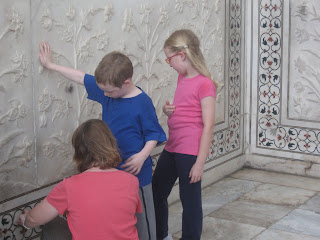 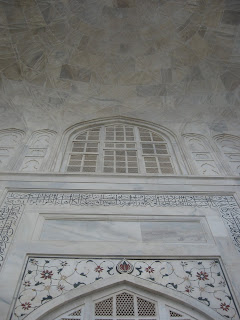 We waited out the rain a little (though Seth liked getting wet) and were glad for the shoe covers so our feet weren't soaked. I want to mention here about people's reaction to us as we tour. We would occasionally see other white adults but never any children. So we were very rare and people always want to take pictures of us or with us. At one museum we spent way too much time allowing them all to take photos instead of enjoying our time. From that point on I decided to only be so nice to a point. The Taj Mahal was especially one of those times. This was something we really wanted to see and enjoy. Immediately upon entering families and people were coming to take photos. After about 4 or 5 pictures I said that was all and kept saying no. I realize some were disappointed and we tried to tell them just to take a picture as we moved, but we would not pose. We were there to enjoy the Taj Mahal. When we had finished we rode on horse carts to get back to our car and the boys horse won. 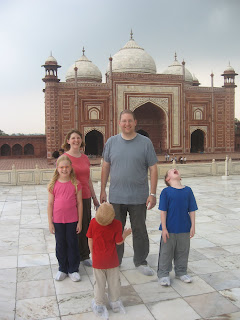 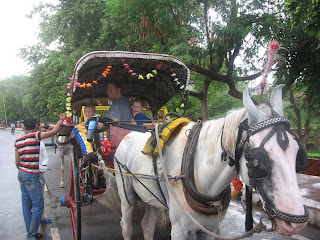 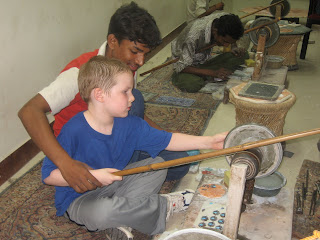 Tuesday we started early again and first visited Baby Taj. We were the only ones there. This is the tomb for the parents of the woman buried in Taj. It is much smaller but probably has even more inlay work of just regular stone. We then went to Agra Fort. Over the next few days we visited a few forts and palaces so some of the details are a little foggy now. But this fort was huge and built over 4 generations. The last was the son of Taj, who overthrew his father and then put him in house arrest in a prison overlooking the Taj Mahal until he died. The fort did have great views of the Taj Mahal. The boys and I really liked their system of 2 moats - first a wet moat with crocodiles, then a dry moat with wild animals. Plus places for archers and cannons and such...seemed like a good system. Rhianna crack me up on the way out because she was fed up with the hawkers trying to sell us stuff all the time and just kept saying no over and over and over. 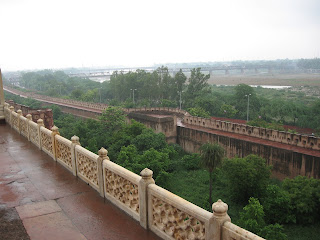 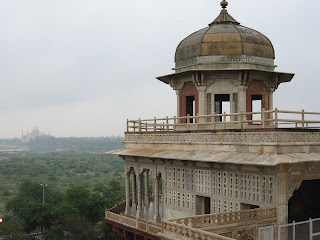 While Agra was beautiful and wonderful architecture and a highlight of the trip, the drive from Agra to Jaipur was the worst long part of all that we did. A little before lunch time and halfway, the windshield wipers stopped working. I fully realize that this is out of our control and that we were in a small very rural part of India so there was little we could do, but still it was terrible. While we ate the driver tried to find the problem and fix them but it didn't work. And now the A/C was broken too. It was cool so that wasn't the problem. It was the rain. It was coming in and it was hard to see. I was nervous the entire drive, I think about 3 hours from the midpoint to Jaipur. Our driver was good and went slow but at some points especially with other traffic and rain I got soaked and could not see and made him stop. It was terrible and not acceptable and I was unhappy and let our travel company know it immediately. They did fix the car that night but I would not do that drive again.

Wednesday was another favorite. We visited the Amber Fort. To get up the hill to the fort we rode elephants. Krista rode with Rand and Rhianna, and Steve and Seth and I rode together on an elephant named Rani. All the elephants are girls and just do a few trips up to the fort each day. They are large and move slowly and you really shift and bump side to side as you go. It was a fun, long, bumpy ride. We toured the Fort and then rode jeeps down to the bottom. 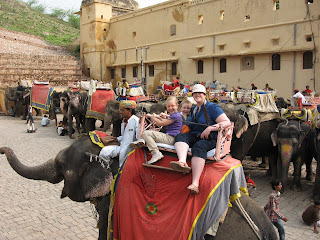 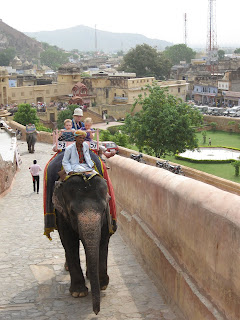 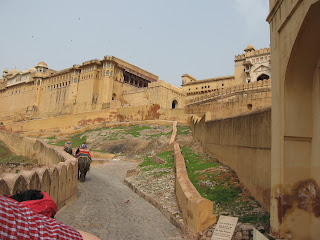 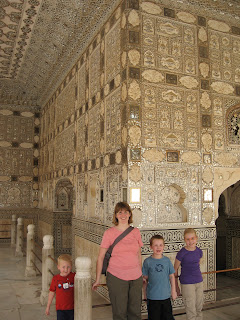 In driving we stopped just briefly at a few other sites, Wind Palace and Water Palace. Then we went to an old observatory. It was built outside with many instruments to track the stars and sun and moon, mainly for the royal astrologers to use. It includes the world's largest sundial. We then went to the City Palace nearby and saw the different rooms and clothing on display. At this point of our travels we had all also gotten tired of eating Indian food, especially the kids. We made it about 5 weeks, but for the last few weeks we had been eating more pasta, club sandwiches, pizza etc. We went out to McDonald's. But then there was terrible traffic because of a big political rally drawing in bus loads of people. We went to see how they do gem stone work but then that was it and headed back to swim and relax. 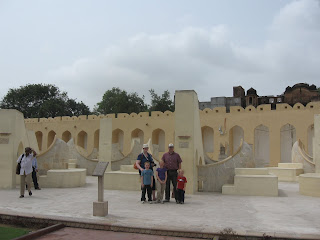 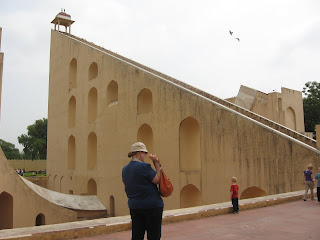 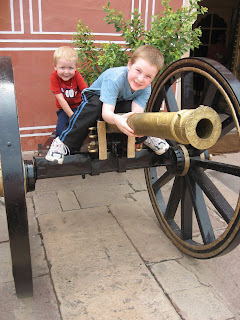 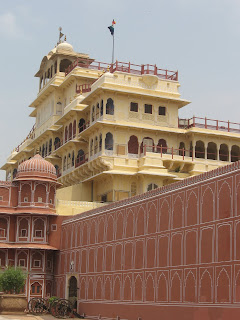 This northern part of India has many more horses and donkeys and you also see lots of camels pulling carts. Jaipur was very hilly and traffic congested especially near the few old city gates that all traffic must go through. We really liked the elephant ride, but we were all wearing down. Since it is such a long ride (and since ours was also so terrible) I don't think I would do this again. I would just go to Delhi and Agra. But we had made it. We stayed safe. We stayed relatively healthy, I just felt like I was always monitoring the kids to see how they were doing dealing with mostly little problems on and off. We saw and experienced so many things it is hard to tell it all. Our guides were all really wonderful and had great historical knowledge of India. The last guide liked to tell the most jokes and just kept saying, "Incredible India!" 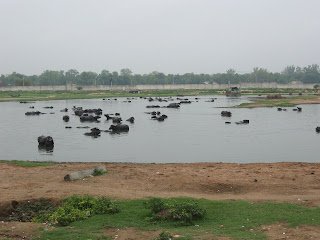 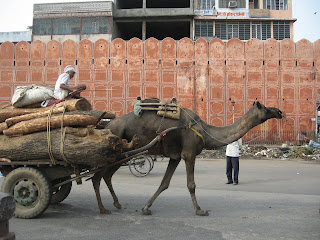 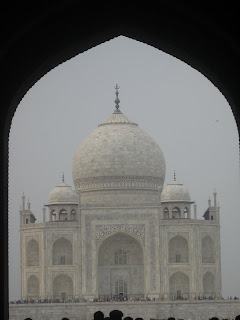 Posted by Anonymous at 7:22 PM