We left on Monday morning to fly to Cochin. It took us 2 hours driving in Bangalore to reach the airport and when we got there Krista discovered her passport was missing. She had copies and so we were able to convince the security to let her through and on to the plane to fly with us. She had no idea if it was lost or stolen, but we knew she needed a new passport and visa to be able to travel and to exit the country. Steve was great and worked quickly to help her. She had to get a police report in Cochin and then left to fly the next day up to Delhi. It was a stressful time and we appreciated the help of my cousin Lora and my sister and mom for trying to give us more info and then of the mission president's family, the Jackson's, up in Delhi that let Krista stay in their home until she joined us the last week. Everything did end up working out pretty smoothly at the US Embassy and the Indian offices to get her visa, though Krista was still questioned every step of the way with a temporary passport/visa. In the meantime, we continued our traveling.

In Cochin we went on a harbor tour and saw the boats from the huge cargo ships down to the smaller fishing boats. The city is famous for the old Chinese fishing nets that are still used. After the boat tour we saw some Kathakali dancing. This type of dancing isn't dancing and moving as much as we are used to. It is more using your face and eyes and hands to express a story. It was interesting to watch but the music got pretty loud and Rhianna started feeling sick. In the morning only the boys went with Steve to do a little sight seeing of the fishing nets and the Dutch Palace and few other things while Rhianna and I sat and relaxed to try to feel better. 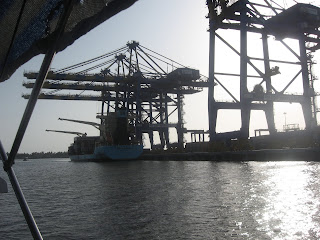 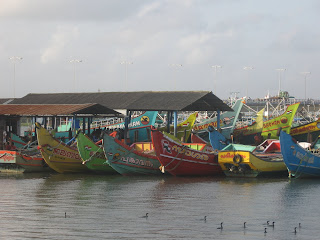 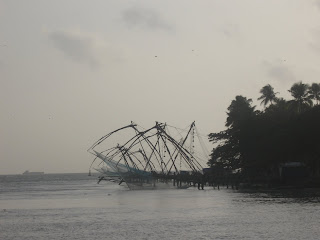 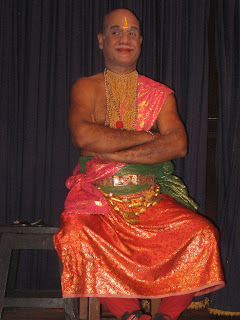 We then drove on to Alleppey for our houseboat tour. We had read that this was a highlight of India but we had no idea what the houseboat would be like or what we were headed into. We were so pleasantly surprised. For our kids this was probably one of the best things we did in India. We had a nice houseboat that did have A/C. So during the day we could slide open the glass windows, but at night as the bugs and mosquitoes came we could close them and have A/C. The back half of the boat was for the staff and the kitchen where they cooked for us. The front half had 2 bedrooms and a living/dining area where we were most of the time. Then out front was the wheel and a small deck to sit on. Seth especially loved this whole experience. He asked them if he could drive the boat and we were surprised they said yes. You travel slowly, and at first they had the kids sit with them and steer. But by the next day they were driving all on their own with the captains just guiding them and giving direction. 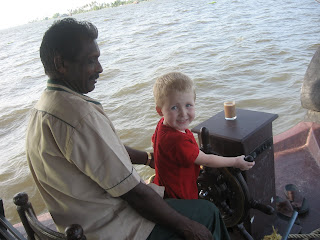 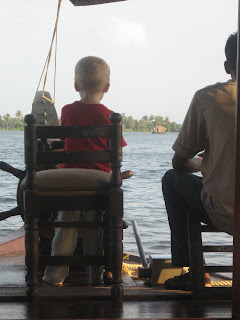 We began just before lunch and they brought us very fresh fried fish along with other typical Indian dishes. This was something our kids had never seen before. We don't like fish much and don't eat it in the US, but we really liked fish several times we had it in India. But this first meal was a little too foreign for our kids and they didn't eat much. So we really appreciated that the cooks noticed this and made a chicken dish and used less spice for dinner and then eggs for breakfast. We also had delicious fresh pineapple a few times and our first taste of coconut water. 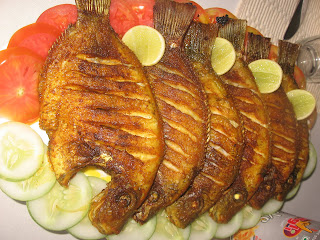 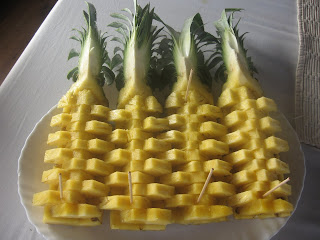 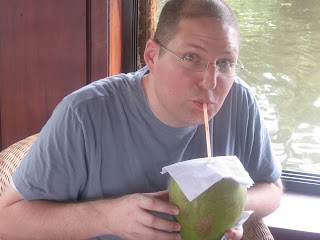 It was fascinating traveling the backwaters and watching the people. They live on these very thin strips of land, barely wide enough to fit their small houses. On some sides are rice paddies and some are a bit deeper for the boats to travel. They use boats for their transport like cars or buses. We would see them out in the water bathing or swimming, brushing teeth, washing clothes, washing dishes, preparing dinner. And then we would still see an occasional satellite and TV and hear cell phones. For me it was always interesting in India to see so much contrast between the old and new in one place. 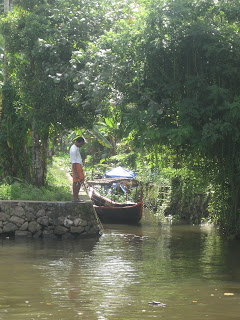 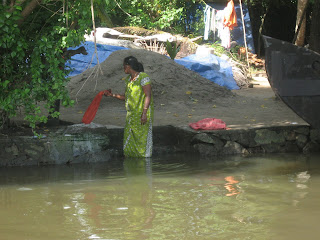 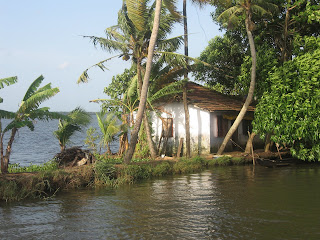 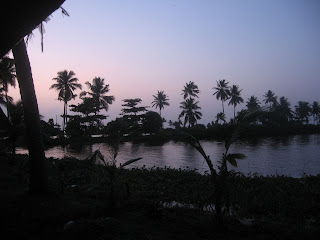 On Wednesday we left the houseboat and drove to Marari Beach. We again were in a very nice resort. We had 2 little huts and once again the bathroom ceilings were left open to the outdoors. We wanted the chance to be at the Indian Ocean. We were on the west coast of India, so the Arabian Sea portion of the ocean. It was monsoon season though which made the waves so rough it was not possible to swim. We did go each day and walk on the beach, but even just being at the very edge of the surf felt a little dangerous because it was such rough water. They did have a very nice pool though and we spent a few hours each day swimming. It rained each day off and on and so we also spent time at the clubhouse watching movies and TV and playing games. 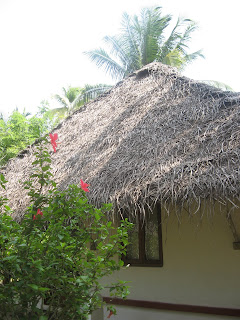 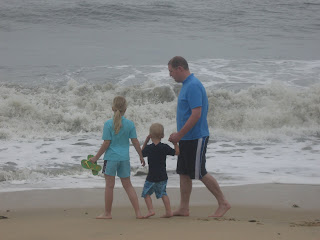 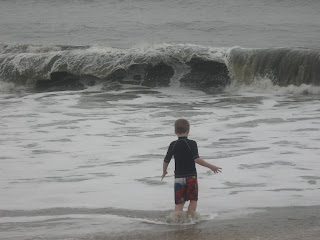 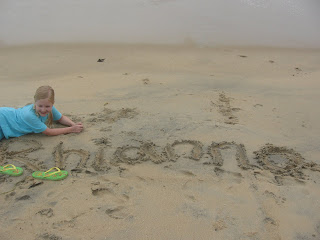 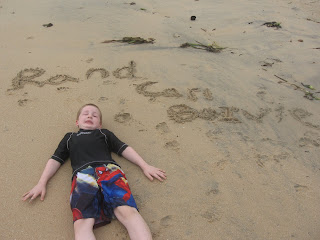 Steve also surprised Rhianna and I on the first day there. During our travels we had our anniversary and Steve's birthday and Father's Day and it was sort of easy to forget them since we were doing things so different than usual. But Steve had called ahead and after dinner all the chefs came out with a cake for Rhianna and I and cards they had made for each of us. 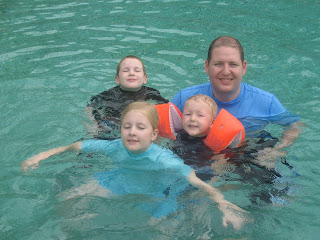 It was a relaxing few days and we especially enjoyed the swimming. But given the length of our travel and that it was monsoon season and we couldn't actually do much at the ocean, we would have shortened this stay if we had known. On Saturday we left and drove back to the airport in Cochin to fly up to Delhi and the last segment of our journey.
Posted by Anonymous at 3:54 PM