Krista joined us on Monday in Bangalore. We were able to go out to a science museum with her and then spent time with my parents. They have a very unique mission which keeps them extremely busy. They are very good at their calling and love the service they are doing. I am glad we got to see and experience part of their lives. I am glad we had the chance to talk and play as much as we did.

On Wednesday our travels through India began. After all we have done and seen and experienced, it is hard to remember and describe it all. I will try to tell you a little bit, but I also have decided it might be best for people to ask me a specific question they are curious about and then for me to answer. So please feel free to email or call or comment if you want to know more.

We started our trip to Mysore late Wednesday morning. We were traveling with all the 56 students on huge coach buses. We went first to Mysore and had a nice outdoor dinner after we arrived. On Thursday, Steve and the students went to the very deluxe campus of Infosys for a business visit and tour. We joined them at the end. Then we went to Chamundi Hill, which was a much bigger hill than I expected. At the top was a temple dedicated to Shiva's wife. Only Steve and Krista and the boys went in and said it was similar to the other Hindu temple we had seen. The best thing up there was a whole bunch of monkeys. They were climbing all over the place and one even climbed on a motorcycle. They were fun to watch. Another funny moment here was the students buying souvenirs. Our guide had even warned us that, like every place you visit, there would be many hawkers selling goods and not to buy them. One student bought incense sticks made of sandalwood for 200 rupees, but the guide then informed him that it was just sawdust sprayed with a sandalwood smell worth only about 20 rupees. On the way down the hill there is also a huge monolith bull that we stopped at. 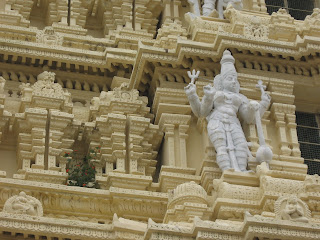 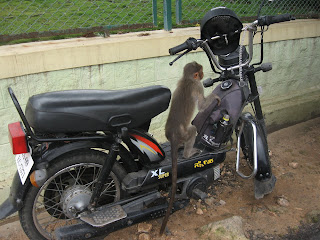 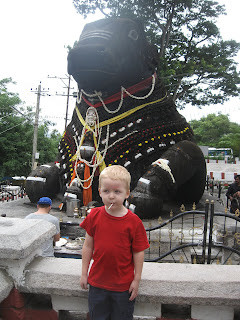 We then stopped at Mysore Palace. This was a Maharaja's palace and the last member of the family still lives in part of the palace. Outside there are lion statues the kids really liked. Cameras were not allowed inside but it was beautiful and ornate. Dark rosewood was in several places and carved and gorgeous. There were huge doors of silver. We enjoyed seeing all the detail and variety and were grateful to Emily, one of the TAs that Seth became attached to. 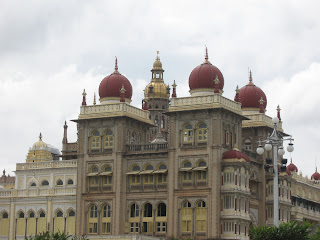 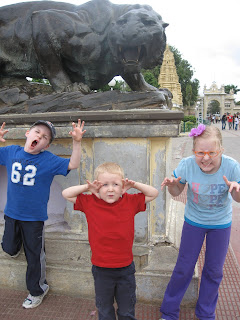 On Friday we left Mysore for Kabini. We made a few stops at a Silk Factory and a Sandalwood Factory and a liquor store for the students (where there were no toilets and so Seth left a Seth patty on the side of the road....not unusual in India but we tried to avoid this). The drive was beautiful. The land was farmland and the soil and plants and people were great to watch. We saw many more cows, oxen, water buffalo, goats, and sheep on the drive. We stayed at a resort called Orange County right on the banks of the river across from Nagarhole National Park. It was a great place to stay. We had pool huts, so yes we had our own private pool for each of our houses. There were also portions of the hut left open to the outside. They also had a kids area in the resort so we had a fun time playing ping pong and learning a new Indian game with disks you hit into pockets kind of like pool. There was an elephant they would bring to the river to bathe and some of the students climbed on her. We just got to get close and pet her. Much of the time there it was raining and so we just relaxed. 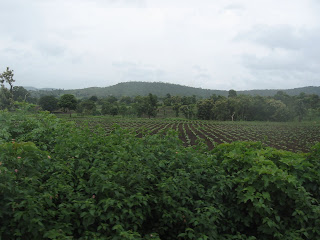 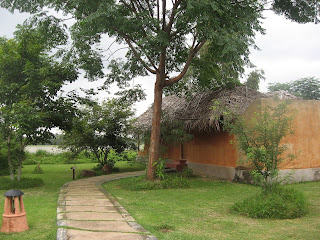 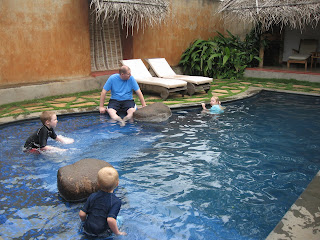 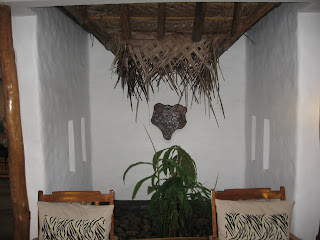 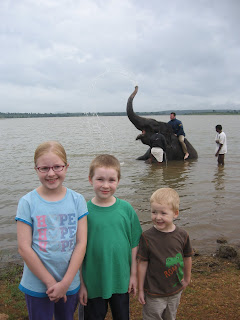 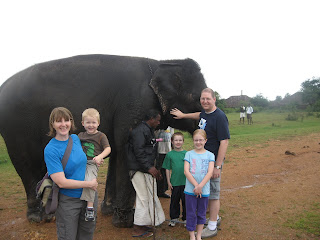 The highlight was the safari. Per the government regulations, Seth was too little to go. Steve and I and Rhianna and Rand went early on Saturday morning while Krista stayed with Seth. She went on a later safari on Saturday. I think the great thing is that each safari has its own story. Ours was the wettest. It was raining when we started out at 6:30 am. We wore big ponchos and first traveled by boat across the river. Then we got on the huge safari vehicle and headed through a small tribal village into the national park. We didn't see much because of the rain, many deer including sambar, some birds like peacocks and eagles. But then we stopped in a clearing hoping for more. All of a sudden the huge herd of deer started running like crazy right at us. There was a pack of 6 wild dogs on the hunt. We could hear the monkeys screeching warnings and it was very exciting. They got one deer on its own but it quickly escaped. But then they had a second deer alone and on the run. It finally had to jump in the river and swim. We watched as it swam a huge loop for probably 15 min. The dogs did get tired and move on and the deer survived. We then saw the dogs cross the river at a shallow point and head for another group of deer. But first they tried taking on a few wild boar. It was funny watching them start at the boar but the boar very quickly intimidated the dogs. We left and then it really started pouring. We were entirely soaked and cold and hungry, but it was a great experience. 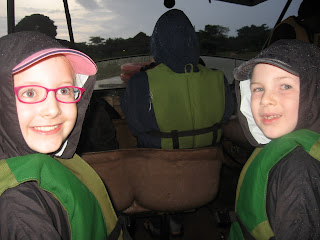 (We decided it was wise of the government to not allow 3 year olds. It was so wet, the animals far away, the ride very bumpy...Krista also had a good safari. It was a little drier in the afternoon and she did see a few elephants and even a black leopard. No tigers for any of the safaris in our group.)

Sunday we headed back to Bangalore. I have to mention that I was very grateful this day and felt like Heavenly Father answered my prayers. The road between Mysore and Kabini is for the most part a very small road. On our ride in the last 20 km took us an hour to drive in the huge coach buses. Parts of the road are still dirt roads and were tricky to navigate getting in. And then it rained Friday and almost all of Saturday and I knew it could be dangerous or tricky getting back out. I prayed from that drive in that it could be sunny and dry for the drive out. And the most sunny, beautiful day was Sunday as we left.

We had a nice time and some very memorable moments. Many of the students were nice to the kids, Emily especially was great with Seth. But many of them were also very drunk most of the time and very foolish and took no responsibility for what they wanted to do. But we were glad to get back to Bangalore on Sunday night to begin our travels as a family.
Posted by Anonymous at 11:08 PM