This was a nice week. On both Monday and Tuesday while Steve was teaching we stayed home and played and also went out to the small playground here in our complex. The equipment that is all metal gets hot just like in Arizona, so instead we took sand toys and they played in the sand, digging up treasure, in the shade under the equipment. Both days we also went swimming. Rhianna and I wore our swim caps this time. We have still had a little bit of hassle because you are also supposed to show your resident card for our complex and we are just renting. But we have worked on that and were able to swim both days. The pool is nice and has a shallow part great for Seth especially but the rest is not too deep either. Rhianna is really getting better at swimming and it was fun both days.

We also changed some of our plans after Monday night. The Indian evening schedule is very different than our families. In the US, Steve gets home from work just after 5 and so we are used to eating dinner at about 5:30, playing a bit, then the kids get changed at 7 pm. We read scriptures and have prayers and the let the kids read a bit but they are in bed by 8 pm. Here families eat a snack at 5 pm and don't have dinner until 7 or 8 pm. Most restaurants don't even open for dinner until 7. And that just doesn't work for us. Seth will for sure be asleep in the car and often Rand too. So we decided we will go out more for lunch and have a smaller meal at dinner time to try to keep things more normal.

On both Wednesday and Friday new missionaries arrived to serve in the India Bangalore Mission. Wednesday it was 6 elders from the US, Friday 7 elders that were natives to India called to serve here. We went early to my parents' home to help make breakfast. The kids were great and really helped a lot. It is tricky cooking for so many here (on Monday there were around 25 people) and they did a great job helping with eggs/french toast and fruit and muffins and potatoes. They were happy to see the missionaries and get to talk with them. 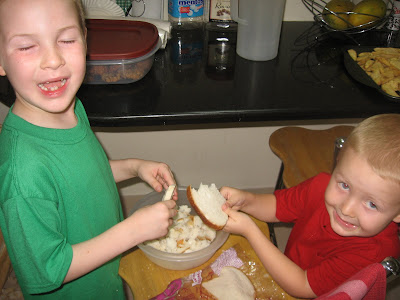 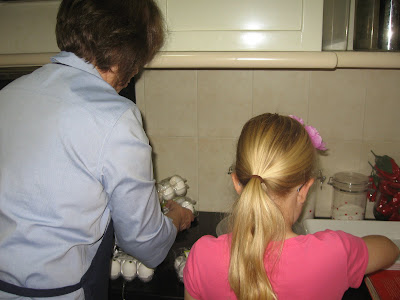 The 2 boys then mainly went back into the bedrooms and watched a movie or played. But Rhianna and I were interested and listened to most of the training. They tell them some history and specifics for India that will help them with language as they teach in English, money and finances, health and safety, as well as talking about their spiritual vision and goals. They do have some very sharp, top elders and I especially enjoyed hearing some of their experiences about how they learned the gospel and were baptized or their memories of when the prophet Pres Hinckley visited about 5 years ago. They were good training meetings and I am glad Rhianna and I could be a part. 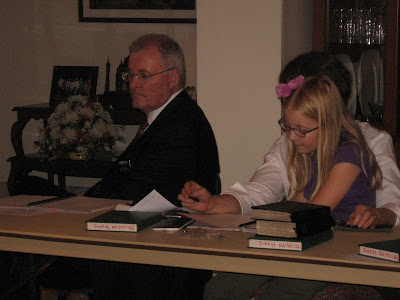 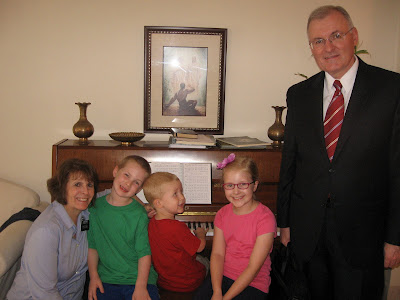 A few other things during the week. Thursday we stayed here and my mom came out. We played Ticket to Ride and now Rhianna and Rand love it! We have played 2 more times just since then. Grandma also brought KinderJoy candies with toys for them and they were yummy. Seth is still having the hardest time with eating here. Often I bribe him with a little treat to get him to eat some regular food. On Friday we also went to see Kung Fu Panda 2. It was a really fun movie but the experience was different. The theater was very fancy and we had to to through several points of security. They had me remove the batteries from my camera and returned them at the end of the movie. We had assigned seats. Then there was an intermission about 1 hour into the show. You could go out or people came around to take orders and serve you. We really liked the movie! 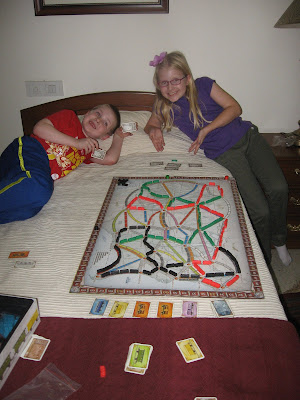 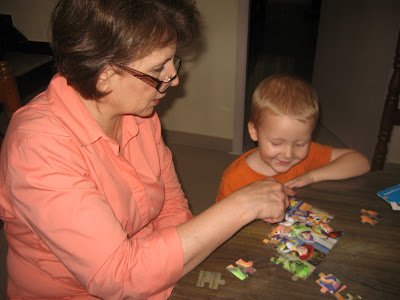 Saturday was spent at Wonderla. This is an amusement park with both wet and dry rides. Some of the rides and pools are separated for just ladies and children, some for gents and some for all. Like on the bumper cars Rhianna and grandma and Seth and I went on one part. Rand, Steve and grandpa went on another. We came away with a few small injuries. Rand got rug burns here from the bumper car seat belt. Rhianna got a rug burn on her leg sometime. Many of the dry rides you need to be bigger so we split up. Rand really liked the Drop Zone that would lift and drop them over and over. They also went on the Water Splash ride and got really wet. Grandma and I took Seth for the little rides. A difference here is that on the little rides, only the little kids, about ages 2-5 by height, are allowed on. No parents. And now I don't think I like that. A few were really cute rides. But on this pirate ship one Seth bonked his face a few times on the bar in front when it jerked. On the Jumping Frog he liked it at first but it was so jerky and bouncy that he started crying and started to try to get out mid-ride. I would rather be on with him to help him be safe. 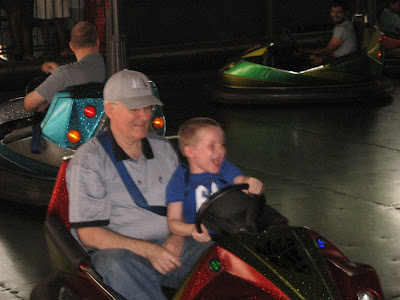 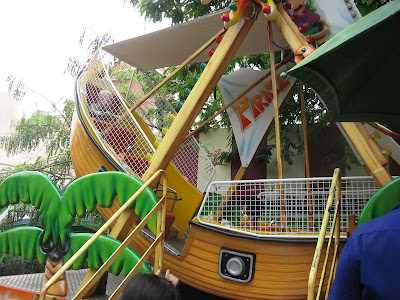 The water part was fun. Again their were a few play pools. We went on the little slides there. One was too steep and I feel bad that I let Seth go down. He bonked his head again and so that was the end of slides for us. Rand also went on a few more but then had enough. Rhianna really likes slides and had fun. She wishes the lines were shorter and was also sad she wasn't tall enough for some slides. But she had fun on what she could do. At the end we went in the wave pool which was probably the best part in my opinion.

We also had good food there. We tried several more local dishes, like the Indian Meals (rice and breads with a few different curries to mix in), kabobs, Paneer butter masala, butter naan. It was very tasty - and of course we had ice cream a few times too. Having been to the park now I do think it is more suited for older kids, maybe 12 and up that could do everything and be safe and have fun. But that was still a really fun day together. 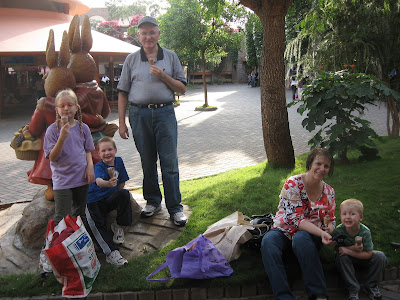 And today we returned to the Bangalore 2nd branch. Rhianna did a good job on her talk in Primary and grandma stayed down with the primary children. We again had great talks and lessons in all our adult meetings. The branch president had wonderful comments to share about avoiding feelings of entitlement in all areas of our lives (church, work, family relationships) with ideas taken from a few apostles. After church we went to my parents' home. It is their 35th wedding anniversary today. My mom cooked a great meal, roast, potatoes, carrots, green salad, broccoli & cauliflower salad, and pineapple with cookies and ice cream for dessert. They told us a little about dating and getting engaged, which is fun especially since my younger brother Calvin just got engaged this week. Then we played Ticket to Ride and headed home.

It was a good week. Things are different but we are used to the way they work now. We enjoyed all the days this week around my parents.
Posted by Steve at 10:40 AM

So fun! I'm jealous you went to Wonderla. I saw signs for it and wanted to go, but Mom and Dad weren't up to it with just me.

This is amazing to read about, Stephanie. Your family is so lucky! They will remember this forever. I am definitely envious...!