Rhianna was very excited when I got home from work today because a special package had come in the mail. Today was the day her new glasses arrived.

Stephanie and I had noticed recently that Rhianna had been having difficulty reading and seeing things that were far away. At first when we had mentioned the idea of going to the eye doctor with Rhianna she had been very reluctant. So, a few weeks ago I went into her room and had a talk with her. One of the things that I told her was that if the doctor said she needed glasses that I would let her pick out the glasses, so she could get ones she liked (A few years ago I found out how to buy my glasses online for super cheap).

We went to the eye doctor while Stephanie was gone to the funeral and it was very obvious from the first test that she needed glasses. Without glasses she could barely read the first line of letters on the chart. The eye doctor went very well until the doctor dilated her pupils. She did not like that at all. However, we got her prescription and when Stephanie came home we picked out the glasses. Because the place I buy them from is so inexpensive I told her she could pick out three pairs (which costs the same as one pair at the local places).

The glasses arrived today and Rhianna waited to try them on until I came home from work. One thing that has been kind of special about Rhianna getting glasses is that one of the reasons she hasn't minded needing to get glasses is because she thinks it will be cool to be like her dad. That makes me smile. Here is Rhianna modeling her new glasses. I think she looks great. 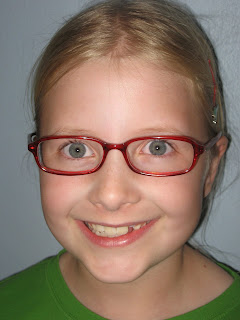 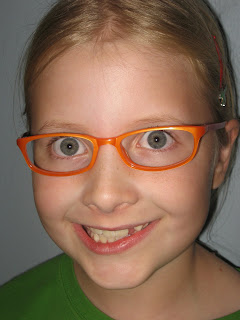 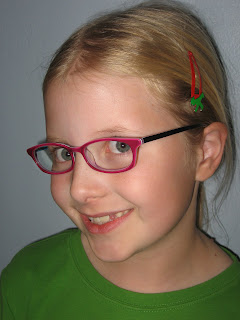 so cute! how lucky is she to be able to change up her look with 3 different pairs? good thing her dad came up with that great idea!

Rhianna, only the coolest people get to wear glasses. I love your new look! I am jealous you have three different pairs. I've been thinking I need to get some new glasses since mine are almost two years old and I only have the one.

I love the glasses. I too was reluctant to get glasses when I was in elementary school, but they don't bother me any more.

Great looking glasses Rhianna. When Michael got his glasses he kept commenting that everything looked so much better and it seemed like he was watching the world in 3D.

I had a pair of red glasses when I was in elementary school also.