Our ward had our primary program last Sunday. As usual, it was very sweet to see all of the children do their parts and hear them sing the songs. This was Rand's first program and it was really fun to watch him. We have church at 1pm and Rand is often fairly tired at that point in the day. When he gets tired, his ability to control his impulses goes down just a bit. His class were among the first to do their parts and he did fine remembering it, but he practically yelled it into the microphone. What was really funny was that during the first few songs he couldn't just stand there and sing. He was really moving around and waving his arms, and doing lots of funny hand motions. Then about halfway through the program they were supposed to stand up and sing a song, but he just stayed sitting down. He put his head on his teacher's shoulder and fell asleep. He then slept through the rest of the program.

I also want to note that Rhianna did great. She was assigned a scripture to read and she got up to the pulpit and read it perfectly. She is such a great reader.
Posted by Steve at 1:33 PM 1 comment:

Tonight we were in the car heading to our ward Halloween party. We were discussing the fact that Seth had really enjoyed his dinner, and that he will eat almost anything. As we were talking we mentioned that both Rhianna and Rand had been that way as babies but then they became more picky eaters. Rand then piped up from his seat and said: "Yeah, I am a really picky eater. I love to pick my nose!" Once the laughter started and he knew he had an audience he kept going talking about how much he loved picking his nose and how much he loved eating his boogers. We are so proud.
Posted by Steve at 10:41 PM 2 comments: 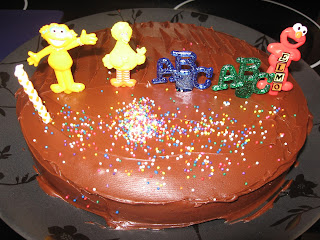 Today is Seth's 1st Birthday. We had a very nice day and just enjoy having this little boy in our family. This afternoon we had Amelia, Grace, Bob, and Corine come over for the traditional First Birthday Cake. After opening a few presents, we went out on the back porch with Seth just in a diaper and he got his very own cake to do with as he pleased. 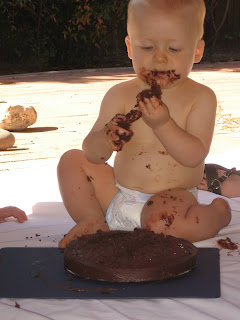 At first he just dipped his fingers in a little and licked them off. It seemed like he would look around at us amazed that we weren't stopping him. But then he started digging in more. He actually ate quite a bit of cake because he would take a handful and then really try to eat it all, lick his fingers, pick up pieces that dropped. He got messy but not super messy - just wanted to eat it. Steve eventually got him a drink and so he would take turns eating and drinking. At the end he was pulling up huge chunks and trying to eat them. Eventually we stopped him because we just figured that was enough cake for one little boy. 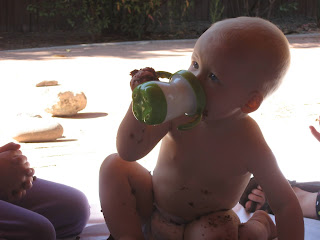 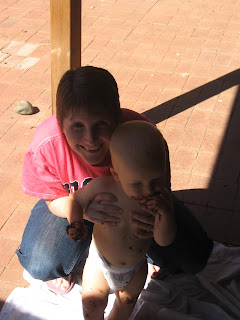 I am so glad he is my boy. After having Rhianna and Rand, I always sort of felt like I wanted a third child. But it actually took us a while of thinking about it and praying about it before we thought we should try to have another baby. Then it took us 9 months to get pregnant, a hard 9 months for me since the other two happened so quickly and I wanted this baby so much. And Seth has just been the perfect baby for us. He has a happy, fun, calm personality. He could just go along with the flow of going other places with bigger brothers and sisters. He was cuddly and cute and I think helped me enjoy all my kids more. And now that he is one, he is just developing into a fun little boy. He started taking his first steps the weekend of Rand's birthday in September - so now he is quite good at walking. He laughs at Rhianna's dancing and opera singing and so is a good brother for her. His first word is Dino (okay he actually only says "DI" but he really knows what it means...all the other sounds are mainly just sounds still). So he is getting better at playing dinos, blocks, balls, etc with Rand and can also take a bit of the rough housing. Just this week I was working with Rand on dribbling the basketball and Seth just stands there and waves his arms up and down like crazy like he is bouncing the ball. We have been switching him to drinking whole milk and he is pretty much eating what we eat broken in little pieces. He has blonde hair that is still not too thick, a great smile and laugh, and his little toes are starting to show the wear of walking everywhere - dirt and broken nails. And I just love him! 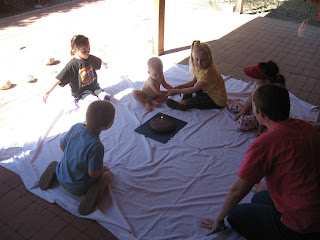 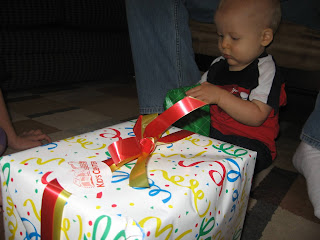 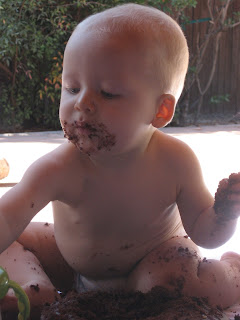 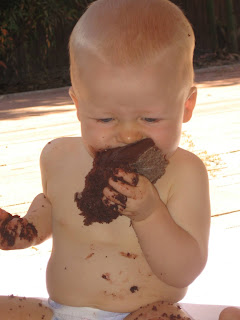 The day after Rand's birthday my sister Maria and her two kids, Andrew and Emmy, came to visit us. They were out in Utah for Dave's sister's wedding and so then took the time after to come down to visit us. They got to stay for 10 days and we had such a nice time together. 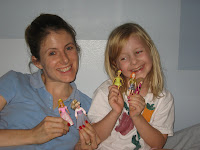 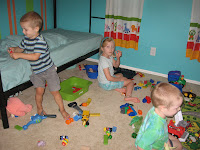 I think Rhianna's favorite was either getting girl time with Maria (playing Polly Pockets, painting fingernails, going to the library and out for ice cream) or having us come visit her for school lunch. It actually worked out well that she had a few early out days for Parent-Teacher Conferences so we also got to go to some museums and parks all together. 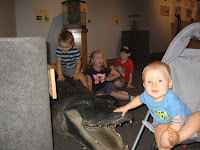 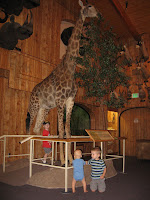 Rand and Andrew did really well together. They both love cars and trains and chasing each other around and playing Mouse Trap and Zingo. Of course Rand had one major break down in the library and there were arguments over toys and time outs to follow. But the great thing is that then they are right back to playing. We got to go to a few extra parks while Rhianna was in school and they always did great together, on the playgrounds, throwing things in the water, riding the little train. 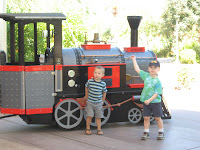 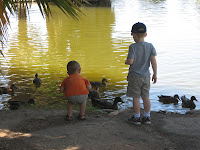 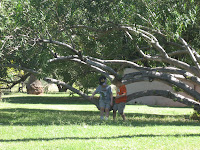 And it was fun to see the 2 closest cousins together. Seth is just about 3 1/2 months older than Emmy. He actually was really gentle with her and though he stared at her great hair, didn't try to pull it that often. He was much more interested in her pacifier. He always would pull it out and either try to get it back in her mouth or try to stick it in his. Seth has been walking all around the furniture and walls for a while but is now taking steps and walking on his own. Usually still it is just 3 or 4 steps but his max is probably up to 15 or so by now. He is getting better and better and Emmy was trying to stand too after watching him. 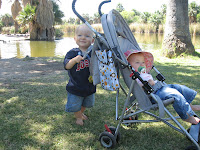 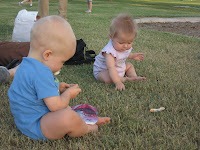 I loved watching all the kids together, watching my kids with Maria, and of course evenings when we just had time to talk. Maria has great energy about her - even with waking up with Emmy (who we think was working on 4 teeth coming in...) she would then go out on bug and lizard hunts with Rand and Andrew. And it was seriously hot outside! And she cooked us some good brownies and enchiladas. She found time to read a book and help plan her kitchen remodel from far away. She is just a great mom for Emmy and Andrew with their little personalities. It was a great visit. Thanks Dave for all the Boston shirts and hats (and of course the Harvard one for Steve). We are so glad we had all the time to spend together. 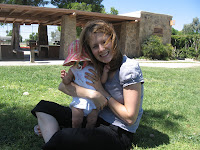