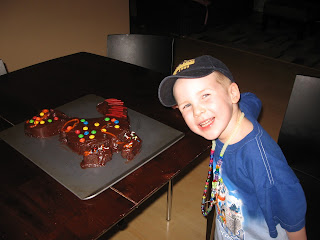 We had a nice day on Rand's birthday. We had to wake up really early to leave for a church temple trip up to Phoenix. But the drive was nice, Seth slept, Rhianna and Rand watched movies and Steve and I got to talk. The kids had a great time playing in a nearby church while Steve and I went to the temple. In fact their legs and feet were totally dirty and black from playing around on the gym floors but they really had fun. The ward provided a lunch for all of us and then we headed back to Tucson.  We hid Rand's presents around the house and he and Rhianna did a treasure hunt to find them (he really liked that Rhianna got a treasure hunt on her birthday). They then just played with toys until dinner. 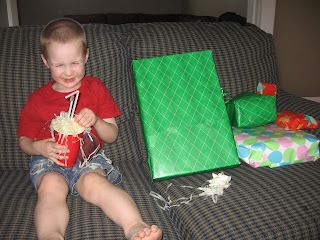 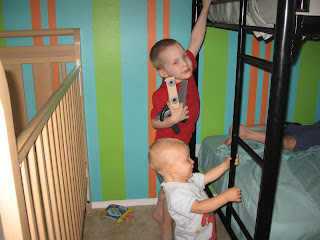 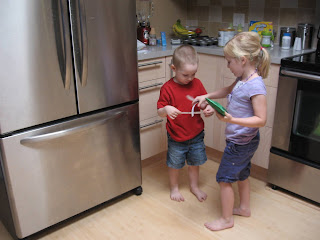 Rand decided he wanted egg sandwiches and bacon for dinner and a T-Rex cake. It was a yummy dinner and the cake was really fun. It was from a silicone mold we bought which was not quite so easy to get some of the parts out of the mold. But after frosting it and letting the kids add decorations it turned out great and made Rand (and Rhianna) really happy and excited and proud. 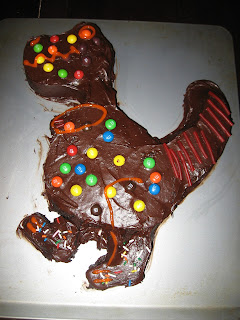 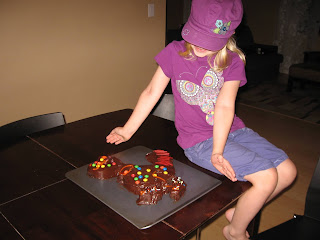 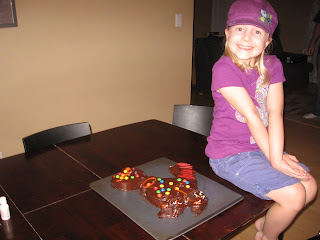 We just had a nice day together as a family celebrating Rand. He is so bouncy and funny and brave...he likes singing and dancing and writing and playing and pretending and so much more. We are glad he is part of our family. 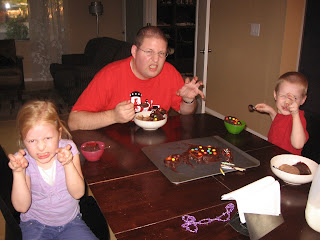 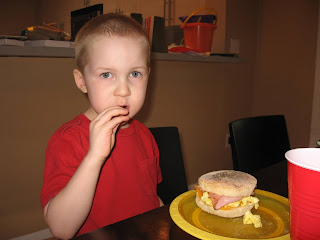 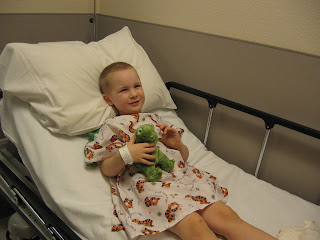 Rand was our super brave boy once again!! Today he had his hydrocele surgery and everything went fine. It was a weird hydrocele, even the surgeon said so, and that was why it was seeming so strange on the ultrasounds and exams. There were actually two hydroceles on the one side and one had somehow gotten twisted around on itself which was causing the blue coloring. She also scoped the other side and everything there looked fine so we shouldn't have to worry about any problems on that side in the future. We had a great surgeon and nice nurses at the hospital. The wait, even with the bubbles and the stuffed animal and books and things they had for him, was probably the hardest. The surgery just took about 1 hour and then just over an hour in recovery. He would just smile and sleep and smile and sleep as he slowly came out of the medication. 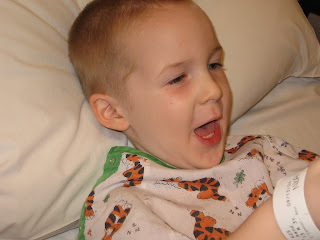 And since we have been home he has done really well. He was really starving since he hadn't been able to eat since last night. And then I had to just slowly give him food to make sure he could handle it after the anesthesia. He said a few times it hurt but has been moving around good and is now in bed. We will see the surgeon again in a few weeks to follow up but I think he is fine.
Posted by Anonymous at 10:04 PM 2 comments:

So one day last week I was in sort of a blah mood and didn't really want to make dinner. So I figured I would just make some oatmeal with blueberries and a few eggs...pretty healthy and easy and fast. Then Steve walked in and said I was making porridge...made me laugh because it sort of fit my blah mood. Well I cooked up the two bowls for Rhianna and Rand and set them on the table to cool while I made the eggs and oatmeal for Steve and I. A few minutes later Rhianna and Rand came in and said, "Uh-Oh! Look at Seth!!" 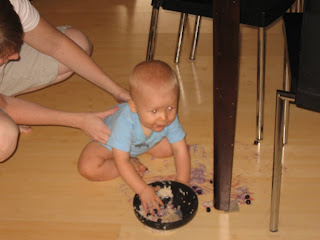 Apparently now he can reach up on the table. And somehow he got that bowl down without it crashing and was silently trying to eat oatmeal and blueberries as fast as he could. You can see him reaching for it as we quickly took the picture and then took him off to the bath. And then after his bath he did eat his whole bowl of oatmeal too. It was great...now I am really looking forward to giving him his own cake on his birthday and watching him go at it.
Posted by Anonymous at 10:48 PM 1 comment:

Steve is now the Young Men's President in our ward at church. Part of this calling is Scouts. So after our first Sunday back from Disneyland, a particularly long Sunday full of different meetings for Steve, he said he would need to buy a Scout shirt. Rhianna said, "This calling is going to change your life." And so here he is (and through new terrific technology I didn't even have to sew those patches on!!) 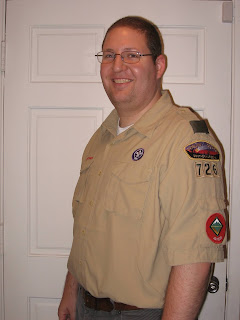 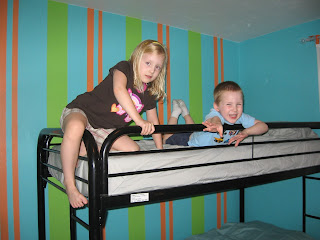 Since Rand was starting to stretch the limits of his toddler bed and since we have family coming to visit this fall....we bought new bunk beds!! Seth will still be in the crib for a while, so Rand has the bottom bunk and every once in awhile Rhianna gets to have a sleepover on the top bunk. 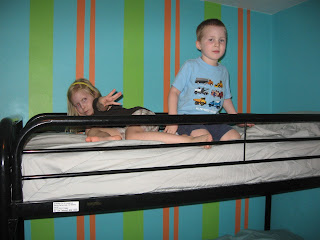 Posted by Anonymous at 10:31 PM No comments: