What is that cute baby Seth up to? 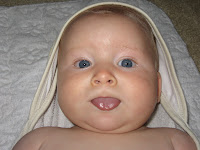 We realized it has been a while since we posted any pictures or stories of Seth. He is such a cute, happy baby and we want all of you to know what he is up to.

Seth finally is putting all his skills together and is crawling forward. He had been up on hands and knees for a while, could get back and forth into a sitting position and could move in reverse. He finally figured it out on Father's Day and since then has started moving forward more and more. One of his main impediments has been that he really wants to be standing as much as possible. One of the things he loves to do is to pull himself up onto his feet and then let go. Unfortunately, he is not coordinated enough to do so without falling backwards. 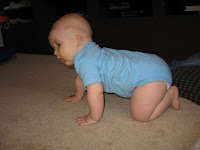 Seth is also almost fully weaned and is sleeping through the night. This is giving Stephanie more energy and is a great thing in general. Mostly we just had to get serious about making him take regular naps and not getting him when he cried at night. It did not take him very long to adjust.

He has his 2 bottom teeth and is certainly enjoying his food. He probably would actually love to be eating even more and tries to reach and grab for things, but we are being kind of cautious since his digestion earlier had been a little more sensitive than the other kids. 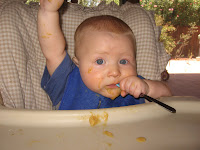 He has learned to play with toys, hit things together, climb on Rand, pull hair. One of our favorite things he does is this cute chuckle, huh-huh-huh. He just has the ability to make you smile, especially now when he smiles and holds his arms up for you... 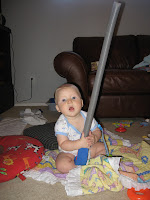 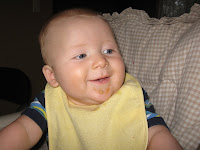 Seth is a super cute baby. I can't wait to meet him in August.

So cute! It makes me so sad that I won't meet him until he is close to turning 1!