Anyone who really knows me well, knows that I love to read. I read a lot. One of the things I have always hoped for is that my children would be readers and that they would read some of the books I loved as a child. So, I was excited when Rhianna picked up reading entirely on her own. We weren't doing flashcard drills, or phonics courses. She just picked it up by herself. By the time she started Kindergarten she could already read. When she started school this year her reading, and her love of reading really took off. She has started devouring books about as fast as we can supply them. In fact, one of the challenges has been that she can read lots of words, but a lot of the children's literature that I loved is still a little advanced for her (Part of this is because, unlike Rhianna, I didn't really start reading books until 3rd grade, so by the time I realized I liked to read I was ready to handle a lot of the children's classics.) One way we have handled this is to read some books aloud with her. We have done that with the first two books in the Chronicles of Narnia and she has loved them. However, she wanted "chapter books" that she could read and understand on her own. By doing a little research we found a couple of series aimed at young readers that she has latched on to. She loves the Magic Tree House books and the Junie B. Jones books, she has also read some Cam Jansen and some Jigsaw Jones.

However, like I said above, she reads them so quickly that it has been tough to keep up with her. Sometimes we have found her reading the same book again because she didn't have any books left that she hadn't already read. In fact, one day I looked and she was so desperate for reading material that she had started reading "What Your Kindergartener Needs to Know" because she had found that it had stories in it. Anyway, this prompted us to get organized. You may also know that I love spreadsheets. I have for a number of years kept a spreadsheet of the books that I have read, along with a list of books I want to read. This makes buying used books and going to the library much easier. We decided that we should do this with Rhianna so that we could keep track of what books in her favorite series she hadn't already read. When I finished, we found that Rhianna has read 57 books this year, virtually all of them since school started. Pretty impressive for a girl in kindergarten. Now we just have to keep up with her appetite for books.
Posted by Steve at 12:50 AM 1 comment:

Rhianna and Rand just finished their dance class last week. Since they are now 5 and 3 we wanted them to have this chance to do a class together. They took ballet from Mr. Rogers. Rand was the only boy with several girls in the class. On the first day back in January, Rhianna told Rand all about listening to teachers and they were so excited to go. Rhianna was really very good about listening and trying to do all the moves. I thought it was funny on the first day, as they were stretching and Mr. Rogers said to move to one side or the other, Rand began making car noises. Rand just kept saying, "I love dancing. This is my best dance class ever..." in his usual excited manner. Both kids had a fun time. They learned the basic terms and positions and also got to laugh and yell and be silly. Mr. Rogers was really great and very patient and ended each class by throwing about 30 stamps in the air and the kids got to pick 2 stamps for their hands. So here are a few pictures from the first and last days...The kids start the next round of parks and rec classes next week. Rhianna will do gymnastics (She just did her first real cartwheel today!! Yeah!!) and Rand will do an arts and crafts class and a little movers and shakers class.

From the First Class...

From the Last Class...

Posted by Anonymous at 10:32 PM No comments:

We decided to start giving the kids a small allowance and to start teaching them about money. (This was prompted by a major meltdown in Target one day after we refused to buy Rhianna a High School Musical journal making kit.). We told the kids we were going to start giving them an allowance and that our family home evening was going to be about money. I decided to teach the lesson. It was interesting preparing to teach my kids about money. I know a lot about personal finance and money management, but it was hard to figure out how to talk about money with a 5 year old and a 3 year old. Here is what we decided. We decided to give them an allowance of $1 for every year old.

We first went over some principles about money.

Our 3 Principles of Money

1. You never have enough money to get everything you want.

2. Because you don’t have enough to get everything you want, you need to really think about how to spend your money.

3. All of the things we have come from Heavenly Father and we should be grateful for them.

How to use our money based on the 3 principals.

1. Save your money so that you can get the things you really want.

2. Because everything we have comes from Heavenly Father, we show our gratitude by paying our tithing.

We had stake conference last week, so this week was the first week where they could pay their tithing. We got to church a little early and they each got a tithing envelope and donation slip. I helped Rhianna with hers, and Steph helped Rand. After Rhianna got back to the bench after giving her tithing she said: “That made me feel really good inside.” I then asked: “Do you know what is making you feel that way?” She said: “The Holy Ghost.” She then spent the rest of sacrament meeting “practicing” paying tithing. That meant she was copying out all of the things on a donation slip onto a piece of paper. I feel blessed to have a wonderful family and such wonderful kids. I am glad we took the meltdown as a teaching opportunity, and it was really great to see Rhianna's face after she paid her tithing. Plus, now whenever she sees something she wants she says: "Maybe I will save up for that and buy it." 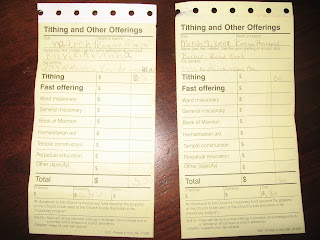